The musical career of Uli spans an amazing five decades. As an artist, Uli is a phenomenon and his unique set of artistic talents has gained him an international reputation as a musical visionary and innovator early on in his career. Having not only explored the world of rock music and written symphonies for orchestras, Uli has recently come full circle to re-connect with his roots.

Uli Jon Roth made his mark on the world of music already as a teenager.

Born in Düsseldorf, Germany, on Dec 18, 1954, he discovered his love for the electric guitar in 1968 and played his first concert later that year at the age of 13 as a member of the band Blue Infinity. In the following years, while still in high school, Uli played in a number of bands in Hanover, including Dawn Road, while also studying classical guitar as well as the piano.

In the year 1973, Uli’s friend, Michael Schenker quit the already established band Scorpions to join UFO in England, which lead to the break-up of the Scorpions. Later that year, the two remaining members of that band – Rudolf Schenker and Klaus Meine – joined forces with the four members of Dawn Road. The first show of the “new” Scorpions was a two-song live TV appearance, which lead to a 5-year recording deal with one of the major international record companies at the time, RCA.

During his five year tenure as a member of Germany’s number one band, the Scorpions, in the early seventies, he built the foundation for his status of rock guitar legend the world over. Uli established himself quickly as one of the main song-writers in the band and gained an international reputation as one of the most important innovators of the electric guitar.

He recorded five albums with the band, each one of which was to achieve iconic status in the history of rock music:
FLY TO THE RAINBOW (1974), IN TRANCE (1975), VIRGIN KILLER (1976) and TAKEN BY FORCE (1977). His farewell album from that period, a live album recorded in Japan in 1978 – TOKYO TAPES – is generally recognised as one of the great live-albums in the history of rock music and has influenced scores of younger musicians.

During his final year with the Scorpions, Uli Jon Roth felt increasingly stifled by the confinements of mainstream rock music and decided to leave the group in order to found a band of his own, ELECTRIC SUN. With this band Uli created a unique and unmistakeable style, which progressed and matured during the course of three studio albums. These were EARTHQUAKE (1978), FIRE WIND (1980) and BEYOND THE ASTRAL SKIES (1984). Tours through Europe and the US established Electric Sun internationally as an important precursor of later musical trends.

Classical music has always played a fundamental role in Uli’s musical view of the world. Even during his time with the Scorpions, it was his classical leanings – combined with a strong influence of JIMI HENDRIX – which set his playing apart and which brought him international recognition. Uli is tremendously respected by his peers for his contribution to the world of guitar playing. Guitar heavyweights like EDDIE VAN HALEN, YNGWIE MALMSTEEN, STEVE VAI, JOE SATRIANI, KIRK HAMMETT, JOE SATRIANI, BILLY CORGAN, MARTY FRIEDMAN, GUS G and countless others have named him as a major influence.

Despite his love for classical music, U.J.R. has nevertheless still felt drawn to Rock.

In 1991 he acted as musical director for a German television show in a major series called ROCKPALAST. Title of the show was A DIFFERENT SIDE OF JIMI HENDRIX and it featured JACK BRUCE, SIMON PHILLIPS, RANDY HANSEN, JOHN WETTON, JULE NEIGEL, PETER BURSCH and many others. This show later became the most frequently broadcast Rock Palast special in its long history and has been transmitted more than twenty times since then.

During the years after ELECTRIC SUN, Uli Jon Roth’s classical leanings took the front seat: He wrote no less than four symphonies, one concerto as well as a piano solo composition AQUILA SUITE. His first symphony, EUROPA EX FAVILLA, received its premiere in Belgium in 1993 within the framework of a concert televised by German TV. The music was performed by the BRUSSELS SYMPHONY ORCHESTRA under the title SYMPHONIC ROCK FOR EUROPE. The three-hour long show was a resounding success with the audience and presented a novel, though organic mixture of classical and rock music. The line-up on stage consisted of nearly one hundred participants including rock singers, band, classical choir and the symphony orchestra.

U.J.R.’s follow-up project PROLOGUE TO THE SYMPHONIC LEGENDS (SKY OF AVALON) sold 60 000 copies on the first day of its release in Japan. At the same time U.J.R. took part in a TV charity event hosted by JOSÉ CARRERAS, which featured the THREE TENORS, SARAH BRIGHTMAN, MONSERRAT CABALLE, UDO JÜRGENS and BONNIE TYLER among others. Together with his one-time colleague, SCORPIONS singer KLAUS MEINE and the PRAGUE SYMPHONY ORCHESTRA, he performed one of the Sky of Avalon pieces, BRIDGE TO HEAVEN.

In 1998 ULI JON ROTH accepted an invitation by JOE SATRIANI to participate in a large-scale European tour of the G3, an almost annual meeting of guitar greatness, featuring three top class virtuosos alongside host Satriani. Highlights of this tour included an onstage jam session with BRIAN MAY at London’s Wembley Arena and a tremendously successful U.J.R. performance at the MONSTERS OF ROCK in Turin, Italy. This was followed by the release of a double album TRANSCENDENTAL SKY GUITAR.

A further milestone in U.J.R.´s career was his headlining appearance at the ROCK & BLUES FESTIVAL at CASTLE DONINGTON in the UK in 2001. His special guests on stage included rock legends JACK BRUCE (CREAM), UFO with MICHAEL SCHENKER, DON AIREY and CLIVE BUNKER (JETHRO TULL, ELECTRIC SUN). This concert was later released as a DVD under the title LEGENDS OF ROCK by SPV. A large scale UK tour under the same title followed one year later, which also featured GLENN HUGHES (ex-DEEP PURPLE) and Uli’s friend and guitar legend FRANK MARINO (MAHOGANY RUSH).

In 2003 Uli recorded his critically acclaimed METAMORPHOSIS OF THE SEASONS in his studio in Wales. The album contains an ingenious version of the complete FOUR SEASONS by ANTONIO VIVALDI as well as an original new concerto by Roth which is entitled METAMORPHOSIS CONCERTO. Together with his own creation, SKY ORCHESTRA, Roth produced a truly monumental album. U.J.R.’s precise rendition of Vivaldi’s timeless masterpiece on the guitar is only feasible because of the unique instrument, his SKY GUITAR. U.J.R. invented this now legendary instrument in order to obtain nearly twice the tonal range of a conventional guitar. This means that it enables him to play in the highest registers of the violin range as well as those of the Cello. Hand built Sky Guitars are now available as a limited edition model through DEAN GUITARS.

In 2005, Uli Jon Roth played his first re-union concert with his old band SCORPIONS in Colmar, France. This was followed by many others in England, Germany and Greece. In 2006, the SCORPIONS performed a reunion concert at the world’s biggest Heavy Metal festival, the Wacken Open Air in Germany, in front of more than 80 000 people featuring Uli and Michael Schenker. The concert resulted in a DVD release, A NIGHT TO REMEMBER.

During that same year 2006, Uli Jon Roth founded a teaching facility in Los Angeles and named it SKY ACADEMY with the purpose of sharing his musical philosophy which transcends purely technical wizardry to find profound artistic depth and to awake one‘s musical potential. The first five day seminar was held at the UCLA and included three epic SKY ACADEMY CONCERTS with a plethora of 25 guest artists, including ROBBIE KRIEGER of the DOORS, DON DOKKEN and MICHELANGELO BATIO. Since then Uli has held over fifty Sky Academy seminars in many different countries. With their wide-reaching range of teachings, these seminars have proved very popular not only with musicians, but also non-musicians and fans. Uli loves teaching and is currently preparing his first Sky Academy book.

The following year Uli played at two big German festivals as guest of the SMASHING PUMPKINS. At one of them, Rock Am Ring, Uli played some unforgettable guitar solos together with the Pumpkins‘ BILLY CORGAN in front of 90 000 people. This was followed by a joint starring appearance which featured Billy Corgan and Uli Jon Roth in a TV show DURCH DIE NACHT on European ARTE Television. Due to his skills as an improviser on the guitar, Uli has often been invited to spontaneous guest appearances with other artists. Over the years, Uli appeared and jammed with DEEP PURPLE, SLASH, PAUL GILBERT, DORO, AVANTASIA, GAMMA RAY, RICHIE KOTZEN and many others.

In 2008 Uli Jon Roth released a new studio album, UNDER A DARK SKY, which featured a full orchestra as well as rock musicians. LIZ VANDALL and MARK BOALS were sharing lead vocals. The album was first premiered live at the KITARANAKI GUITAR FESTIVAL in New Zealand, where Uli taught several Sky Academy seminars in auditoriums to school children in three high schools. This was followed by large tours on several continents in recent years.

In 2012, Uli debuted at the ROYAL ALBERT HALL in London, performing for the SUNFLOWER CHARITY, which is dedicated to alternative cancer research. On this memorable evening, Uli shared the stage with BRUCE DICKINSON, BRIAN MAY, JOHN PAUL JONES, BRIAN AUGER, ALFIE BOE, ALICE COOPER and IAN PAICE.

In 2013 Uli embarked on an epic tour and played over 100 concerts and over twenty Sky Academy seminars, including a tour of South America. He guested with SMASHING PUMPKINS at the iconic GLASTONBURY FESTIVAL in England, as well as with Deep Purple and DORO at the WACKEN OPEN AIR FESTIVAL in August. He also guested in Sao Paulo with Brazilian metal band ANGRA and TARJA TURUNEN later that same month.

Later that month, in February 2015, Uli Jon Roth played a three-day tour of Japan to virtually sold-out venues, which included the legendary SUN PLAZA HALL in Tokyo, which had been the concert hall SCORPIONS had originally played with Uli back in 1978 and where they recorded one of the strongest live-albums of all time – Tokyo Tapes. Uli’s return to Sun Plaza Hall was an emotional occasion for the fans and the memorable concert was recorded for Blu-Ray and DVD release by a Japanese Television station. During this tour Uli also held his first ever Sky Academies in Tokyo and Singapore.
In the spring of 1916 Uli presented THE ULTIMATE GUITAR EXPERIENCE tour to audiences all over North America. The program featured guest artists Jennifer Batten and Andy Timmons.

With his current tour of legendary Scorpions tracks from the influential early era of the band, Uli keeps on amazing rockers, guitar freaks and aficionados of classical music alike.

Uli Jon Roth’s next release is imminent – the counterpart to his previous double CD will be released this autumn under the title TOKYO TAPES REVISITED. Uli will celebrate

the release at Loud Park Festival in Japan’s Saitama Super Arena in October.

And there is even new material on the horizon… As it seems, the journey of one of the world‘s greatest guitarists is far from over.

The Electric Sun Years Vol. I & II (2000) (part of the Historical Performances series) 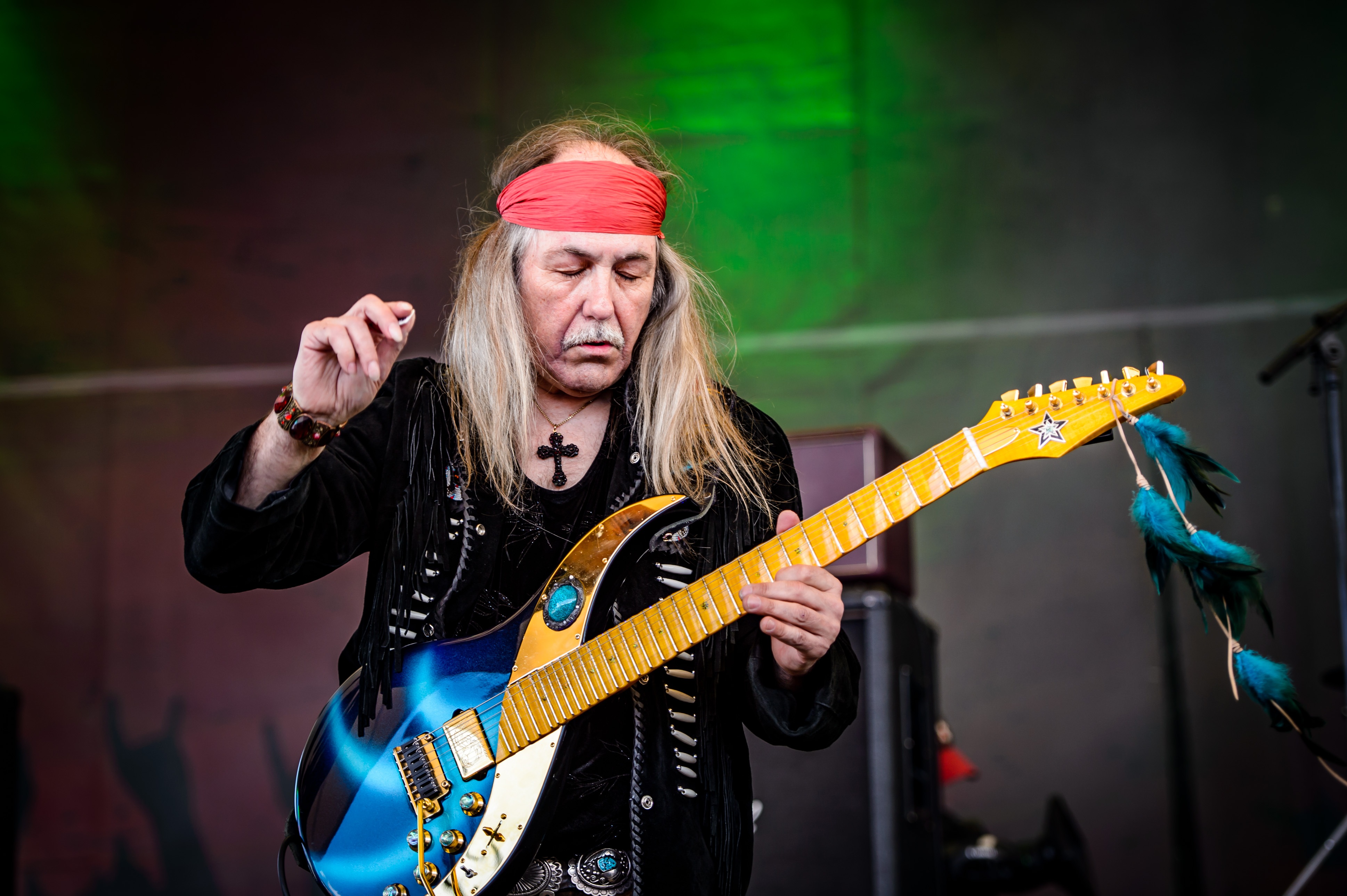