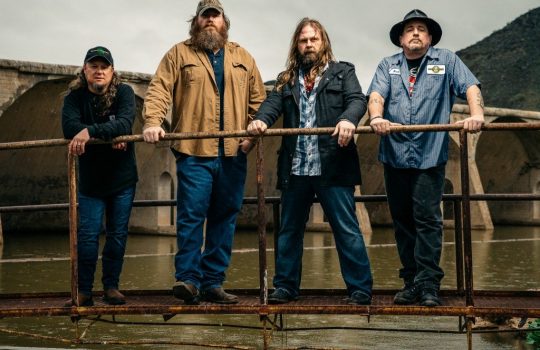 For over 10 years now, Hogjaw has continued to immerse themselves in music that they completely believe in. Music that defies the boundaries of country, and rock, perhaps more aligning themselves squarely in what they believe to be southern rock, or at least what they figure that genre should sound like in 2018. Since the early beginnings, their music has reflected the personal experiences and flavor of life that all members still enjoy.

Hogjaw is a family. A family that started in the late 1980’s with a group of guys in high school who began to play music together, learned their craft together, and became what would inevitably become lifelong friends. Over the years, band projects would come and go, members would change, and new directions would be taken, but the underlying connection of that family was never lost. In 2006, with a newly kindled interest in getting together on the weekends for some jamming, BBQ and cocktails, the members would again come together as one – a band that was ready to finally give it all they had and write the music that they believed was in short supply. Hogjaw was finally realized. The first record “Devil in the Details” was born from those jam sessions, and the material that had been stacked up like cordwood.

Since those early days, Hogjaw would go on to release five studio records. Each of which would find its way into the ears of those who connected with the raw feeling, grit and lyrical journeys of the music. Hogjaw would enjoy the “Grassroots” movement that would propel them forward in the vast world of original music and as a band, has kept the integrity that so many have identified with.

As we find ourselves in 2018, Hogjaw has found it’s true unique identity. As a band that has toured the United States and Europe multiple times under the power of its own engine, the road ahead is clear. A “byway” of honest music, performed with skillful integrity, to a fan base that knows what they want to listen to while they drive through this world of music.

The sixth studio record “Way Down Yonder” is the latest of these travels, and finds the band members going further down the road of originality, and will offer even more musical and vocal journeys than ever before. Hogjaw continues to prove they’re willingness to keep the southern rock path a well travelled one for generations to come.