Jennifer and Sam began in late 2011 as a musical duo. In essense, Hitherside was an internet band and Jennifer and Sam wrote, recorded and produced their own original Melodic Metal songs and videos. They landed an endorsement deal with PreSonus Audio Electronics with the release of their debut single/video, ‘Insignificant Other’. From then on, the group started building a strong international fan base. PreSonus quotes that “Hitherside is a radio-ready, Alt-Rock, one-two punch that explores the dichotomy of heavy guitars paired with female vocals. The result is intense, emotional and highly listenable music”. In the summer of 2012, Sam and Jennifer were chosen to perform an acoustic version of ‘Insignificant Other’ on a local television music station called GumTV. After creating six songs, the duo rounded up three other musician friends from Sam’s former band to play a few live gigs. Sam and Jennifer then decided to go back into their studio to focus on polishing their sound and to write more music.

Later on, in 2015, the duo found other talented and highly motivated musicians to form a new line up in order to play live.

A self-titled 12 track debut album was released in 2015 and was well received internationally.

Their second album, 'Blue Lotus', was released in March 2019 on Painted Bass Records. 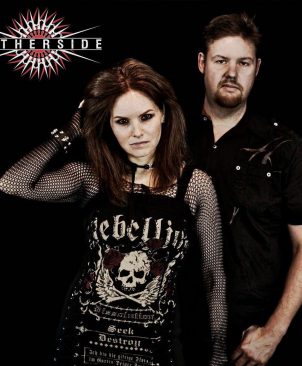