Bill Roseman Trio : An "Electrifying Joyful Blues" sound to keep the audience involved and entertained: guaranteed to rock the house!

The eclectic playlist of the classic "Power Trio" formation of guitar, bass, and drums includes Blues, Rhythm and Blues, Rock'n'Roll, Funk and Soul classics covers ; mixed in with Bill's original tunes, inspired by the aforementioned styles, yet remaining unique and personal. Familiarly rootsy, yet distinct, and original.

Bill was raised in the South Jersey area near Philly, and grew up listening to Rock, Soul and Jazz. Picking up a guitar at 13, and inspired by electric bluesmen like Albert Collins and Buddy Guy, he set to learning some blues guitar, as his main form of expression.

Arriving in Europe in the '90s, Bill helped form the Medford Slim Band, which enjoyed success at the time releasing a couple of cds, and playing the festival circuit, including the Belgium R + B festival in Peer, and the Amsterdam Blues Festival. Also during this period, he worked with the Calvin Owens Blues Orchestra, and did a stint in Luke Walter Jr.'s solo group.

Roseman has played all over the Benelux, and in France, Germany, Switzerland, and the U.K.; not to mention "back home" in clubs on the east coast from N.Y.C. to Philadelphia, Pa.

With the release of his first solo album, OUTSKIRTS..., Bill continues his musical odyssey, mixing roots rockin' grooves, with the blues always evident.

OUTSKIRTS... where Soul, Rock' n' Roll and Funk embrace to form an electrifying joyful Blues. The Sound is made, Asses shake; the Atmosphere made vibrant, exalted. Voices resound, Limbs quiver. The Groove, urged by the The Trio, won't rest anymore... There is nothing left to say but, "Shake it, baby...!" 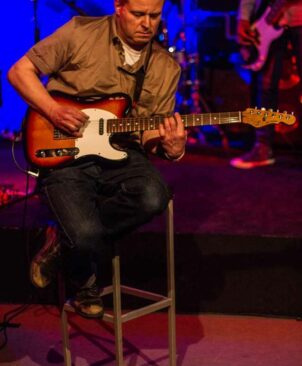