Who can forget "Wild Thing"? The Troggs have always been remembered for

this 60’s anthem, but it is just one of their many worldwide hits: "With A Girl

Me”, "Love Is All Around" & "Night of the Long Grass". They all followed in

rapid succession to give The Troggs world-wide acclaim. Dubbed by many as

the "first British punk band", they have continued playing in their own

Never strangers to controversy, many of their records were considered by the

"powers that be", too suggestive for the masses, and they consequently banned

them. How anybody could judge Reg Presley's tongue-in-cheek delivery to be

dangerous to the morals of the young is hard to believe.

The Troggs feature Chris Allen (stepping in the shoes of Reg Presley), Pete

Darren Bond on drums (son of the original drummer, Ronnie Bond). Their

popularity has never waned, and they are still in great demand both in the UK

and the rest of Europe. They regularly headline festivals attracting thousands of

fans. Their appeal holds no age barriers, fans ranging from the stalwarts, who

have supported them throughout the years, to the many new fans from younger

and UK released a 52 track CD box set, and Castle Music Pictures and

Following a series of strokes and a diagnoses of lung cancer at the end of 2011,

Reg Presley, regretfully, decided to retire from performing and gave the band

his blessing to carry on with new vocalist, Chris Allen. Being a veteran of 60’s

music, Chris has performed with The Animals, The Commitments, Denny Laine

On 4th February 2013, Reg peacefully passed away at his home surrounded by 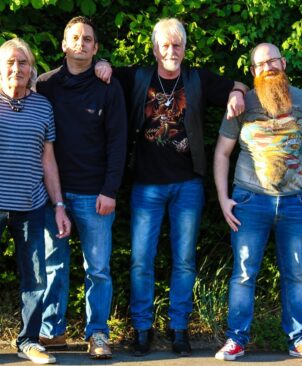