When we first got to listen to the new King Tree & The Earthmothers tracks from their forthcoming album, this sprung up in our collective minds : "What if The Kinks had Gram Parsons and Jimi Hendrix in the band and were jamming their own version of The Beatles with a tiny pinch of Desert Stoner, for good measure”.

Every intro got us instantly hooked and the songs developed into massive classic rock anthems, making us travel from the swinging sixties to 2022 and back at warp speed.

When asked how to describe their music, the band mention "Mystical, evocative, psychedelic rock ‘n’ roll. Inspired by images of Tolkienesque fantasy worlds and classic sounds - everything from Motown to the New Wave of British Heavy Metal."
Say no more, we're in !

Make no mistake about it, the band formed by new guitar hero on the block, Henry James, also known for his axework in Robert Jon & The Wreck, is the quintessential classic Rock 'n Roll power trio.

Get ready to hit the "On" button on your lava lamps and start traveling across sonic galaxies provided by King Tree & The Earthmothers.

We are extremely proud to add this band to our Rock family and to propose them on a stage near you in October and November 2023." 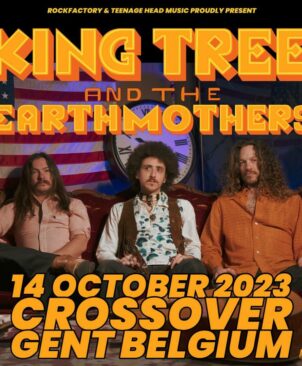