THE NEW BREED OF ALTERNATIVE METAL

10ROGUE grew out of the musical friendship of seasoned songwriters Jon Buckley and Vincent Weynen who were teenagers and mates in South Africa in the late 1980s.

Although the pair have been writing and co-writing on and off since then, in mid-2014 they decided to collaborate on a more focused level, and recruited bassist Stan Verfaillie.

In the Autumn of 2014, 10ROGUE was completed when singer Peter Evrard joined the group and added to the band’s own blend of metal-rock, fused by heavy riffs, deep grooves and melodic vocals. Add to that clear classic metal roots and a firm focus on modern melodic hard rock and you have a dynamic, talented and geared-to-go group of musos.

In March 2015, 10ROGUE teamed up with the Indie label, EMP. The team employed the services of top Belgium producer and multi-instrumentalist Tom Lodewyckx, and released their first single and video,“Know Better”, in September 2015. At the time of writing, “Know Better” has had over 8 000 YouTube hits, and has been played on regular rotation on over 160 Internet-based radio stations around the globe.

Mid September 2017 the cd “Serpentine” was released in the UK. The single “ Dark Angel Princess” has gone global on YouTube, generating over 9 000 hits and giving the band no other option than to create a physical live band.

Buy a ticket Tickets are not sold by Rockfactory 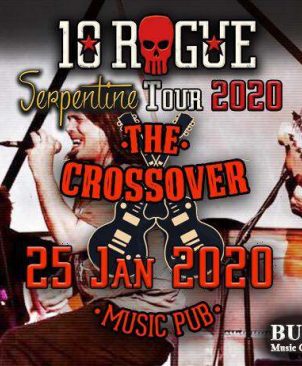 Buy a ticket Tickets are not sold by Rockfactory